﻿
​BRIEF STORY (contains spoilers):
Film Z takes place after the timeskip with Brook as the last joined member. The story is about Z, an ex-marine who wants to destroy the whole world. When he is heavily injured in a battle with marines, he is found by the Strawhat pirates and they rescue him. However, Z soon realizes who they are (pirates) and starts a battle on Thousand Sunny. Z's crewmembers soon come to pick him up and when they see Z engaged in the battle, they join him. As a result, Nami, Robin, Chopper and Brook are involuntarily turned 12 years younger. The one who had to deal with these inconveniences the most is Nami. The crew was able to escape thanks to Sunny's Coup de Burst. They land on an island and they start gathering some information about Z and his deal overall. The pirates meet Aokiji there and he provides some useful information to them. In the end, the crew sets out to find Z on the last island...
﻿
​HINTS:
Zoro and Nami in their battle suits both have something green on them, unlike the rest. (whisper: "And they stand close to each other, too!")﻿

Also, this is a bit stupid and I know it isn't anything huge and it's just too-much thinking from my side, but.... Corazon, Cora's full name, means "heart" and I found it a nice coincidence that he is right between Zoro and Nami xD

﻿There is also another small hint in a poster Oda made ^^. Zoro and Nami are standing close to each other (again), but as if that wasn't enough, Nami is also holding Zoro's precious sword Wadou Ichimonji and he doesn't seem to mind at all ^^ It isn't just a small coincidence anymore - Zoro is always very cautious with his swords, he even gets annoyed when someone touches them (mostly strangers) or when they are used in a way that has nothing to do with swordsmanship. And yet, here we are, Nami with her right hand so-casually~ on his sword ^^ wait... that could have sounded dirty... n-nevermind!
﻿MOMENTS:
0:25:33-0:25:35
Nami and Ain clash; an interesting note here is, Nami uses a move Gust Sword against her. (for later reference)

​0:29:32-0:29:41
The first ZoNa moment in the film - and it is not something small, either! Nami tries to free Zoro from the plants but doesn't succeed. An interesting fact is - both Nami and Chopper were equally close to Zoro..but Nami was also closer to Sanji. Yet, she decided to free Zoro instead.
Maybe it is just me, but Sanji might have been a bit surprised at first when he saw Nami like that; I mean, he stares in their direction for a while and later on does he change his attention to Chopper. (jealous much? xD just kidding.)

If someone still doesn't believe Nami was closer to Zoro... here is a huge gif of them...

​0:30:21-0:30:22
Franky uses Coup de Burst and the crew all tries to hold onto something. Nami holds to Zoro (and the plant) and he uses his leg to protect her ^^ probably the biggest moment in the film xD

0:35:19
Out of all the crewmembers, Nami shows the greatest discomfort about her being turned into child. She claims she can't navigate properly because of it. 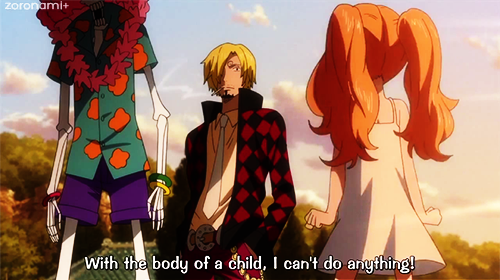 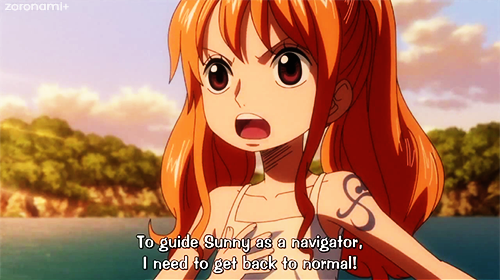 Sanji at first agrees with her and scolds others for not understanding their situation. But then, he starts imagining about being able to observe Nami's growth, which surprises Nami greatly and she blushes a little. However, she is soon seen uncomfortable with Sanji's thoughts and has a sulky-like expression. 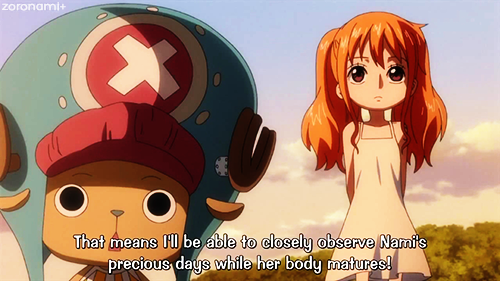 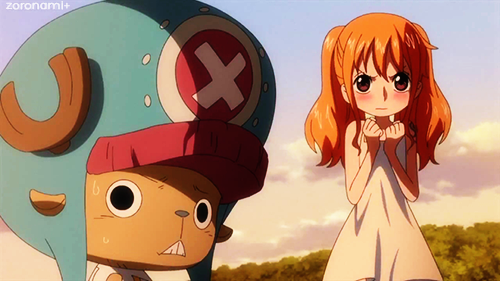 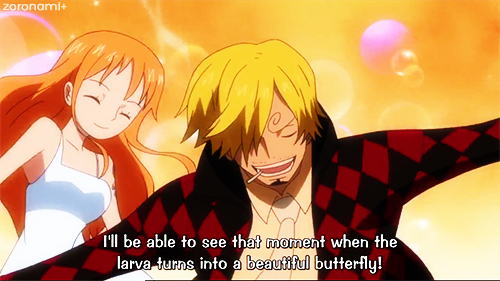 0:36:16
Zoro doesn't say anything about Nami's or any other one's situation, but after Sanji finished his (pretty perverted) speech, Zoro immediatelly comments how Sanji's thoughts are disgusting. You go, Zoro. Please make sure this pervert is as far from Nami as possible.

​Also, Zoro, Nami and Chopper are the only ones sitting/standing on the brick wall XD family much?

​0:36:40
Zoro and Sanji then continue arguing over childish things (I can beat you when I was a baby..that kind of argument). They are soon stopped by Nami, who shoves their faces away from each other with her hands. And looking at Zoro's expression when she does so, he looks kind of annoyed but not in a way he would like to argue with her or Sanji any further.

1:17:11
To Nami's light surprise, Zoro asks her "which way" after the crew decided to battle with Z. Actually, it could be "understood" in two ways at that moment - he could be asking her which way to the Island Z is heading to, or he could as well just be asking her which way to go back to Sunny xD Either way, Zoro doesn't seem to have any problems with the fact that she is small (and according to her can't navigate properly), as long as she points the right way to go for them (or him? XD). After that, she followed him.

​Zoro later clashes with Ain. What makes this fight kind of interesting? While it's true Nami and also Robin faced Ain, Nami and Zoro are the only ones who used some "sword" and also "elemental" techniques against her (Gust Sword x Water Stream). I know it isn't anything big, but I found it interesting (I often get excited over nothing..sorry) ^^""

1:32:00
He defeats Ain and returns Nami, Chopper, Brook and Robin to their current age. As mentioned already, Nami was the most discomforted by her situation and her change was also the most visible one. She should thank the swordsman for that... haha xD

Those are all the ZoNa moments in this Film I could find ^^ If I missed anything, lemme know!

The greatest moment for me is, when Nami was holding onto Zoro and he used his leg to protect her a little ^^ after that, I was very thankful he called Sanji's thoughts about imagining Nami growing up disgusting. Not that I have something against the cook, but the thought someone would observe every step of you while you grow up... and he isn't even someone you are romantically interested ... that is just creepy to be honest.

Aside from that... I also enjoyed some FRobin there ^^

Overall, I must say for myself that this is one of my favourite One Piece films. I enjoyed it a lot - the characters, story, character designs... and the hype was very high ^^ I know in comparison with Strong World, there could have been some plotholes and such... but for some reasons I still enjoyed this more.
Comment Box is loading comments...