Hints mostly from cover pages of a manga or manga itself. If you want to search for Jump cover hints or Volume cover hints, visit this page: Hints from colorwalks/volume covers etc.
There are mostly hints with Zoro and some feline beasts and I really like their interaction in it. The tiger from chapter 419 was pointing him the way to go, much like it was his navigator - and who else could that be other than Nami? xD. In chapter 481, a cat-sensei is acknowledging Zoro's work, and in the 568 chapter, Zoro is chasing a lion ^^ all those feline beasts are somehow related to Nami and I really like that fact =.=

-This cover page is from chapter 32 - it's just colored. Here, we can see Luffy, Zoro and Nami in Chinese clothes and Zoro also has absolutely no problem with supporting Nami's chair with a pitchfork. He doesn't seem annoyed at all ^^ 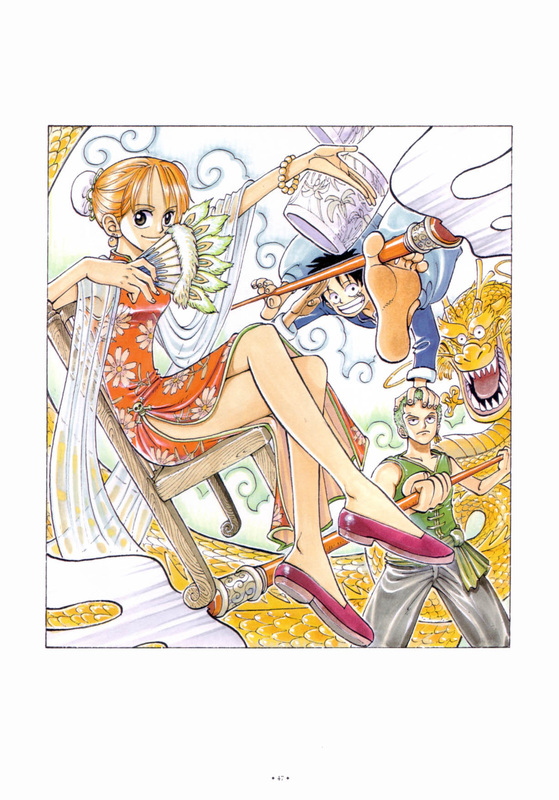 -A cover with Nami and a fox trying to hitch a ride. I dare to say that this scene kinda looks like in some of those Spanish movies, no? Nami wears a cowboy hat, in the same way does the fox. Well duh, it wouldn't have been such a problem if the fox in Spanish wasn't called "zorro" - and guess what? It IS! I don't really think Oda doesn't know about it - in one color spread, there was a fox doing exactly the same thing Zoro was doing (link ->here<-) - but then, who knows :D
-It's also strange that Nami has a tag with words Where Ever. Nami is a navigator and she often knows where to go, so Where Ever is a bit strange. What's more, there is a pointer with words Route 666, which is said to be a hellish number. Now, who was it that said will go to hell? Nami herself said she will probably go to hell and in Fishman Island, Zoro even said he will chase his enemies to the depths of hell. It can be assumed he will make sure he delivers her to hell himself, can't it?

-Very simply: The fox "zorro" is with a navigator Nami. She has a tag with words Where Ever and both of them are trying to hitch a ride on the route 666, which is a kind of symbol of hell. In another words, Nami doesn't seem to mind going to hell if it is with "zorro" ^^ 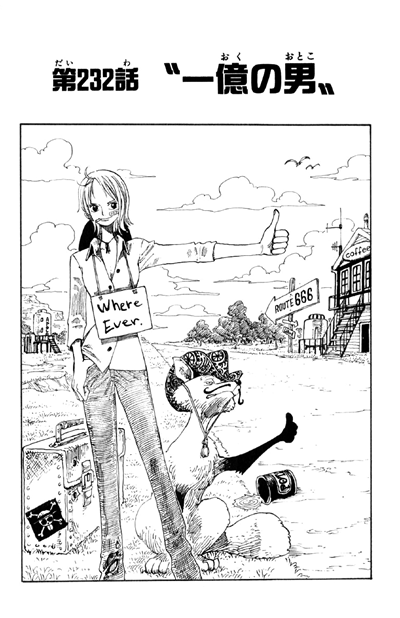 -Cover with Nami and the Lost Child. No matter how bad Luffy's direction is, it still can't beat Zoro's. That's why people will always remember him as a lost child, right? And there you have it xD 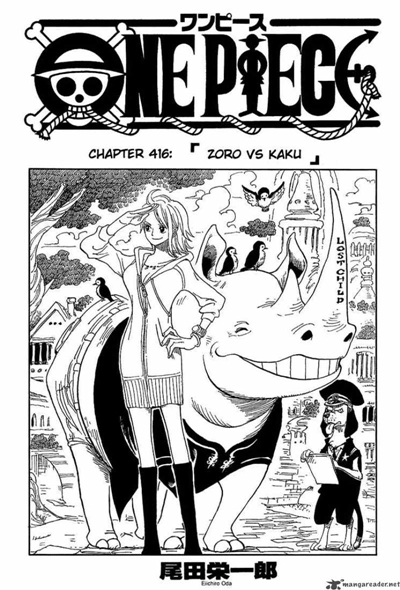 -A feline beast which is also ORANGE is pointing Zoro a way to go. Nah, don't take this one too seriously :DD I just like how the feline beast is acting like his navigator ^^ 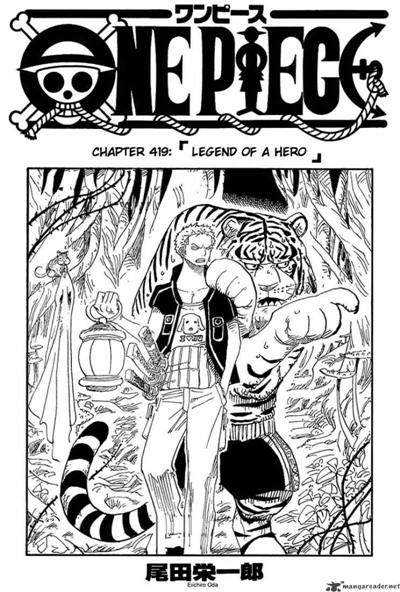 -A cover page of Zoro painting caligraphics (he wrote sword, I think) and near the door is a thinking cat, who is most probably his teacher. His sensei is a cat and cats resemble Nami ^^  The doors also have a wave pattern - and wave is the meaning of Nami's name ^^ 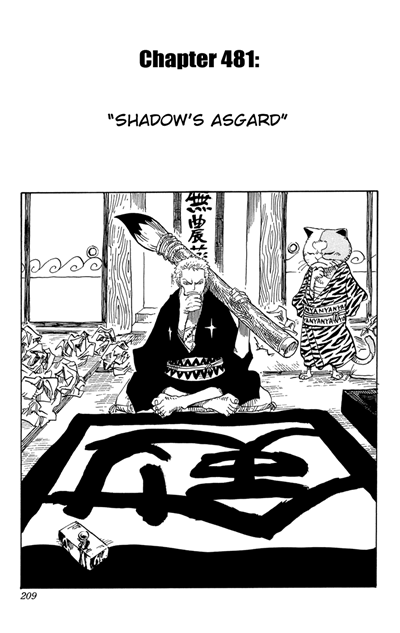 -A little concidence? Anyway, Zoro is trying to catch a lion, who is hiding in a sunflower field. In chapter 263, Oda drew a cover page with Nami, on her t-shirt was also something between a lion and sunflower. Nice hint, right?
-Bellemere also remade an apron for Nami. The picture is a lion, but as Nami said, it used to be a sunflower. Then again, Oda really likes those sun-lion jokes as it was the biggest issue to name their ship Thousand Li...I mean Sunny ^^" 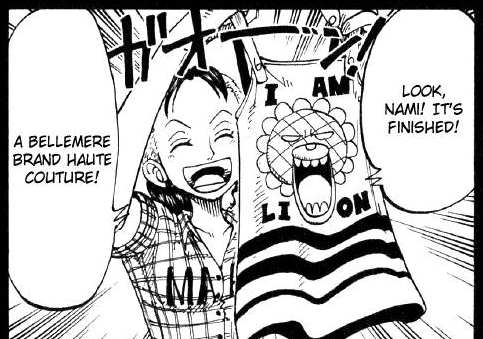 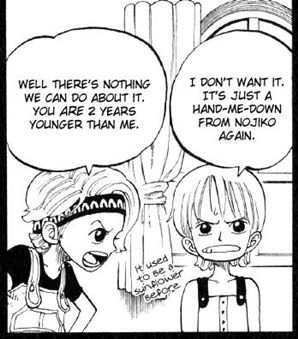 ->Robin's seijuu later said in SBS that Nami's flower is sunflower. Well, I admit that Thousand Sunny is also a hybrid of a lion and sunflower, but beside that, these are the only lion-sunflower "jokes" I stumbled upon. If there are others, please tell me, I would like to know :))
-Zoro's "brothers" Johnny and Yosaku fishing near Cocoyashi Village, Nami's hometown. Nothing serious, just liking the fact that it might be very natural if it was Zoro who would return back to Cocoyashi ^^ (since I kinda doubt he can find his own hometown...well, maybe with Nami's help yes ^^) 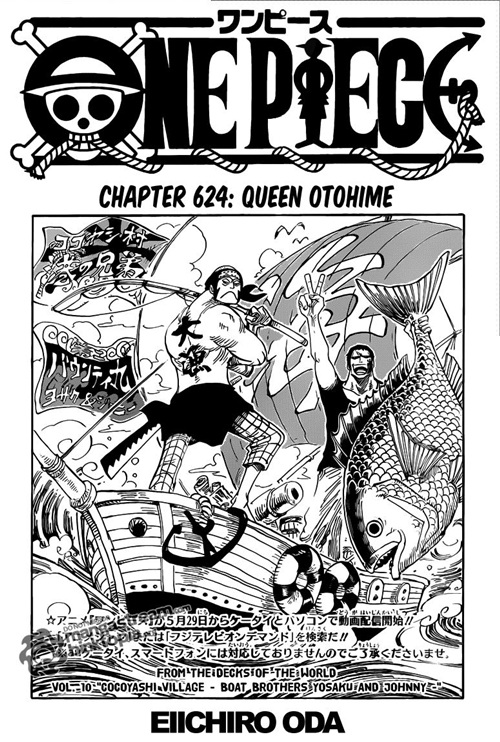 -A crossover manga of One Piece and Dragon Ball. In this cover, Bulma is in symmetry with Nami while Vegeta with Zoro. What's interesting is that Bulma and Vegeta are married and their son Trunks is also in a symmetry with Chopper ^^ 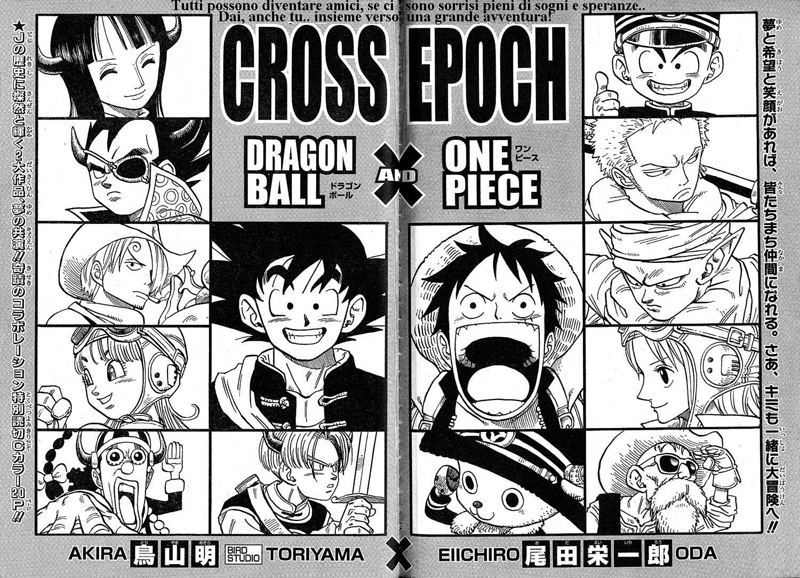 Other hints from manga (anime too)

-Although it's not much again, but a submarine Franky made has a shape of a shark and it also has a number 3 on it - maybe a coincidence, but either way, the shark resembles Zoro and number 3 is Nami's number ^^ 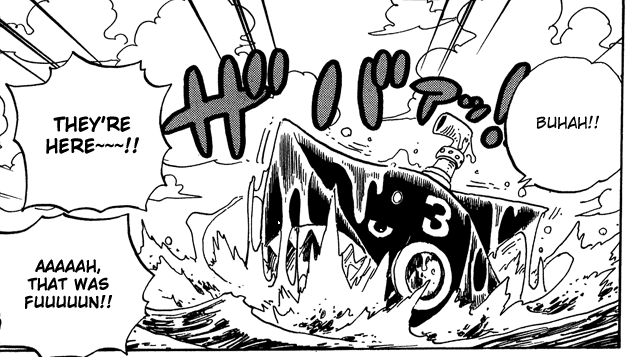 -In Dressrosa, Zoro wears a cat costume - a CAT costume - and the cat resembles Nami the most :3 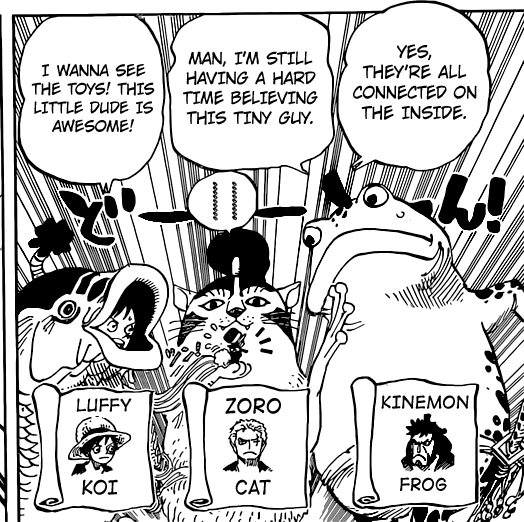