While relaxing on the beach, the crew's Going Merry gets stolen. As they are trying to find the ship, they come across the Thief Brothers who are aspiring to be the greatest thieves, trying to steal the Diamond Clock from Clockwork Island. They all later encounter Trump Pirates, whose captain wants to be a Pirate King. After Nami is kidnapped by them, the crew disembarks on the Clockwork Island in order to save Nami and get their ship back...
MOMENTS

19:45 (+ many times more); 32:45
Not that much of a moment as a small "similarity" Nami and Zoro shared in this movie. They are the only ones from the crew who corrected this guy whenever he mixed up idioms.

39:43
Back to the story... the crew managed to reunite and in the midst of the chaos, Zoro had his swords taken from him. Usopp found them and threw them down to him. However, it is Nami who catches the swords, which definitely is no small feat; if I am not wrong, they must weigh a lot and Nami didn't hesitate or complain about it at all. Zoro is grateful for both Usopp and Nami and he thanks them for their help ^^

​39:49-40:11
Now this is something I noticed while making the gif and I don't think many people really caught it because the moment happened quite fast... As Zoro approached Nami to retrieve his swords, Nami beamed a legit smile at him - she must have felt happy for him, because she knows how important they are for him ^^ 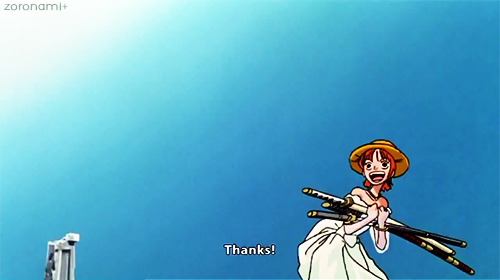 However, her expression changes when she notices the enemy attacking Zoro from behind. She only calls out his name out loud...

.... and Zoro reaches Nami in time to protect her and himself. The interesting thing here is that although Zoro had his back facing his enemy at the time, he knew they were going for an attack; this leaves another point for discussion: was he aware of the enemy himself, or did Nami's call of his name, the tone of her voice that somehow indicated him there was danger approaching? I think it could have been a mix of both: Zoro often knows what goes around him, but he must have realized the enemy is approaching real fast when he saw Nami's expression and heard her voice.

Well, this is it everyone ^^ in comparison with the first movie, there are less moments I guess? However, Nami got the chance to handle Zoro's swords *insert Lenny face here*, so I can't complain XDD and he also saved her, which also counts ^^

Story-wise, I enjoyed it more than the first movie. Nami didn't act like someone who was captured at all (she pretty much won all the games against Trump pirates), which made me admire her even more ^^ the only thing that kind of made me raise eyebrows was the beginning of it when they got their ship stolen and had to get some clothes somewhere... and these clothes happened to be wedding ones o.o the thing is, wedding robes and such definitely cost something, so for them to say "there was no other choice" while I don't think they would have a lot of money with them in the first place... quite weird. Another weird thing was HOW in the hell was Borodo able to get Going Merry on TOP of Clockwork Island that was ruled by Trump Pirates (their HQ was pretty much JUST below where Merry was) and Borodo wasn't a member of that crew?
Maybe I didn't watch properly and it was Trump Pirates that stole the ship... but I do remember Borodo saying something like "I even had to steal your ship for you to help us".... well, I can't be bothered by this, there are better things I can do in my free time XD

So, how was the second movie for you? Did you like it and all ZoNami moments in there? Let me know in the comments below ^^
Comment Box is loading comments...