This Saga has 5 arcs:

﻿-On their way to Shabaody, the crew (except from Zoro who was training) encounters a mermaid named Keimi. It doesn't take long and soon, they find out Keimi's friend named Hachin is kidnapped. Although the crew doesn't know the mermaid long, they decide to help her. Keimi then calls some fishes to help them navigate to the place Hachin is being held. The moment after, Zoro comes out from the training room and Pappug starts warning them about these places known for a lot of kidnappers and he talks about Keimi and Hachin, too. Zoro listens to Pappug and after both Pappug and Keimi finish talking, he voices himself. Although he didn't hear Hachin's voice and wasn't there when the crew met Keimi, the talk still reminded him of a certain moronic fishman they ran into before - Zoro seems to be more concerned about all this because of the past than the rest (except from Nami of course). And if you forgot, Zoro is talking about the past where the Straw Hats helped Nami and her village in freeing them from the fishmen pirates.﻿ 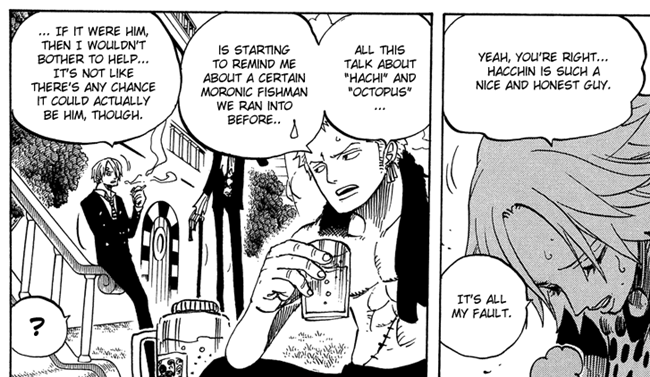 -> ch. 491
﻿-The crew finds Hachin who immediately recognized the pirates and tried to hide his identity from them by covering himself in an ink. After hearing his voice and seeing his silhoutte, Zoro is again the first one to react. He seems to be suspicious of Hachin and he probably has a feeling he has seen him before, too. He immediately asks Nami what does she think, because she is the one who was with the Arlong crew and should know its members the best. From his way of talking, he didn't really want to save someone who was part of the crew that made hell from Nami's life. Her opinion matters to him now more than ever before and he even tells her what he thinks.﻿ 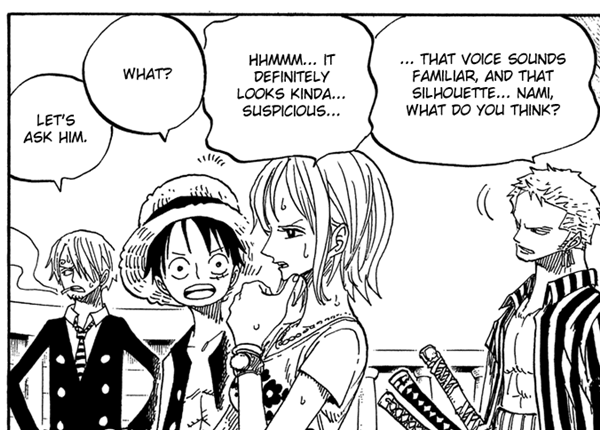 -> ch. 492
﻿-After the crew finds out Hachin is actually Hatchan from Arlong's crew, Luffy shows that right now, he cares about food more than the past. His behaviour however makes Keimi think they are friends with Hachin. When she happily asks Zoro whether they are friends with him, Zoro shows he is extremely pissed and declares they are not friends.
I know it was more for a comedy efect, but the fact that he made this kind of a very angry face definitely proves he really doesn't like what happened back in the past. He was angry at the thought someone from Arlong's crew could be their friend and that naturally applied to Hachin. He couldn't have known Hachin isn't that bad and is actually harmless - that was something only Nami knew and that was also the reason why the crew later helped Hachin out. May I also say, even though it was Luffy's order, it was still Zoro who freed Hachin from the cage.﻿ 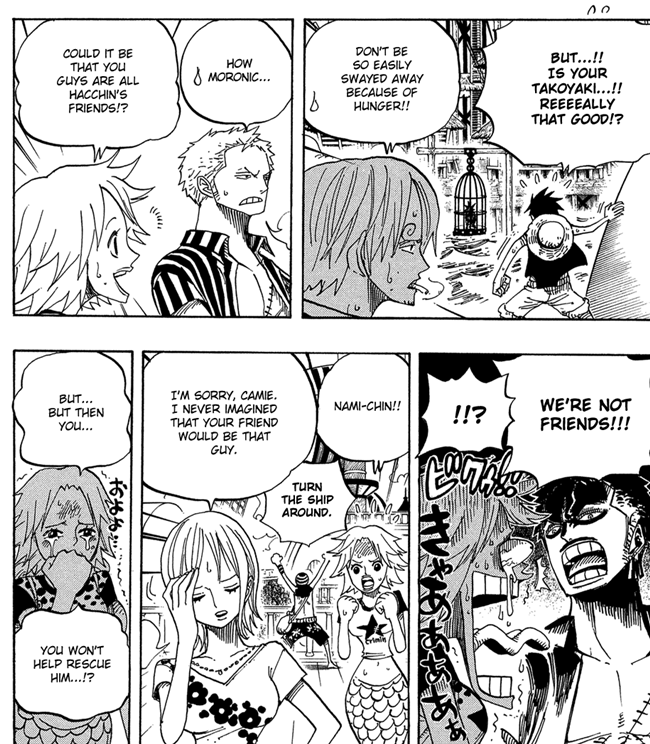 -> ch. 492
﻿-After many happenings - mainly arriving at Sabaody Archipelago, saving Keimi from being sold in the auction, meeting Rayleigh as one of the auctioned subjects, running from marines after Luffy punched one world noble, they successfully arrive back in Shakky's bar. All of them then discover Rayleigh's true identity as Roger's first mate here. Rayleigh then mentions Buggy's name and Zoro with Nami both show annoyed expressions when they remembered the pirate.﻿ 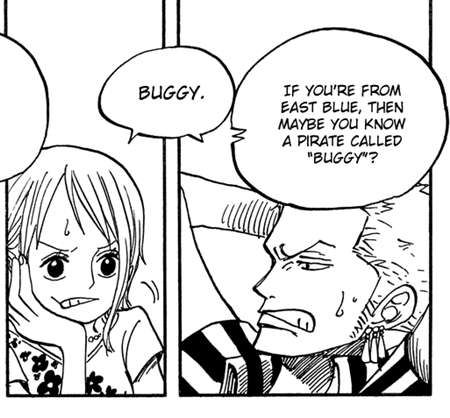 -> ch. 506
﻿-The crew later parts ways with Rayleigh and before they can split up and hide, they get into a confrontation with marines. When the admiral Kizaru shows up, he attacks the Zoro-Usopp-Brook group. With Kizaru's Logia abilities and seriously injured Zoro, the later is being easily targeted by the first. Although the group Nami-Sanji-Franky stands quite far from Zoro's group, Franky watches what is happening and he claims Zoro will die if he takes another one of Kizaru's attack. Nami also shows she is very terrified and she thinks Zoro will die. However, Zoro is soon saved by Rayleigh. ﻿ 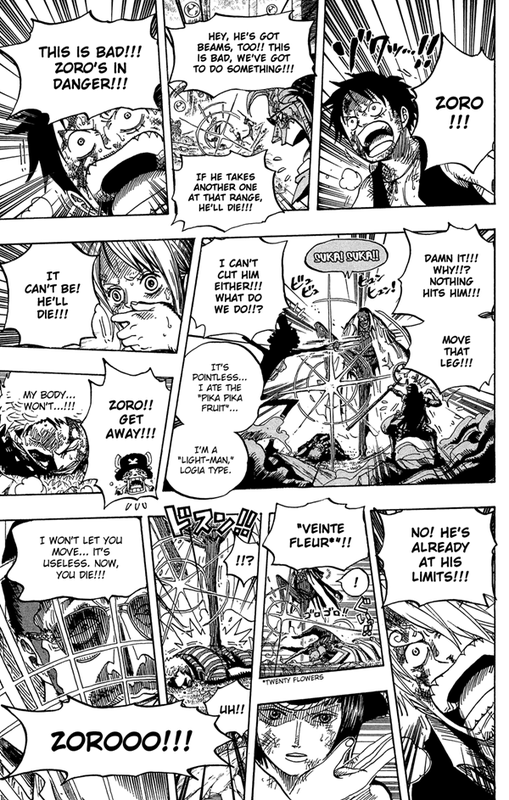 -> ch. 511
﻿-Even though Rayleigh was fighting Kizaru, there were still other enemies - Sentoumaru and a Pacifista that looks like Kuma. As if it wasn't enough, a real Kuma later shows up and he makes Zoro dissappear. Nami is very sure it's the real Kuma, because she saw Kuma's ability already and she is shocked to see it again, this time being applied on Zoro. When she describes Kuma's abilities, she has a very terrified expression, because she never saw a girl Kuma used his ability on ever again. And if Kuma made Zoro dissappear, there is a great chance they won't ever see Zoro again - and that is something I'm sure was on Nami's mind and it made her really worried. 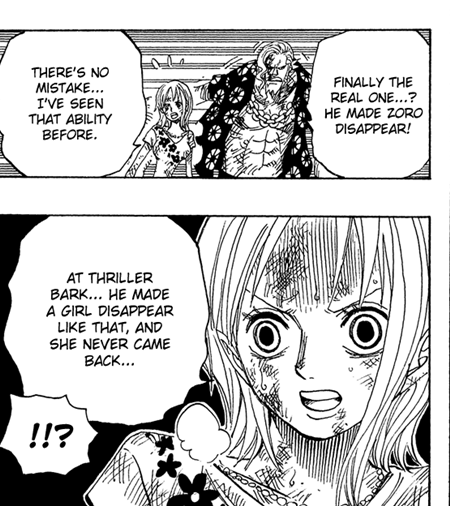 -> ch. 513
﻿-After Zoro's dissappearence, Luffy tells the crew to to run for it now and think about  what to do next later. Despite captain's order, Nami falters and she seems to be worried about Zoro. She then receives a comment from Franky telling her it's not time for that and he tells her to go.
Nami often prioritizes her safety first, but here, she shows a lot of concern for Zoro and even almost stopped in her tracks because of it - if Franky didn't remind her this sure isn't time for it. 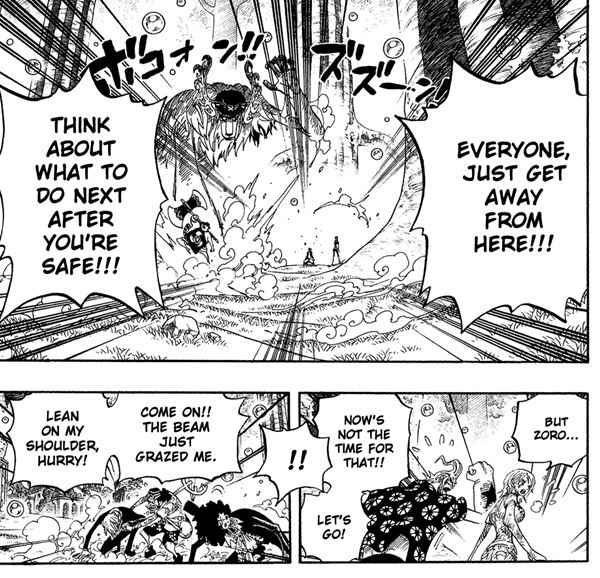 -> ch. 513
﻿-As if it wasn't enough, Kuma later makes Brook, Usopp and Sanji disappear, too. In this situation, I would assume she would just call these three's name, but Nami instead calls Zoro's name first again.﻿ 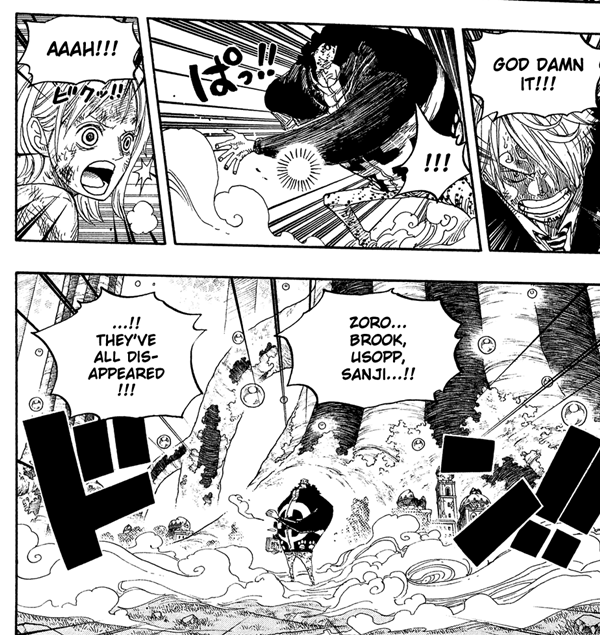 ﻿-After the crew's separation, there are no moments until the timeskip.
-There might be a little hint in Amazon Lily regarding Boa sisters - the colours they have on Amazon Lily somehow correspond to other three Straw Hats:
Boa Hancock - an outfit in red colour and has black hair like Luffy
Boa Sandersonia - has green hair like Zoro
Boa Marigold - has orange hair like Nami﻿ 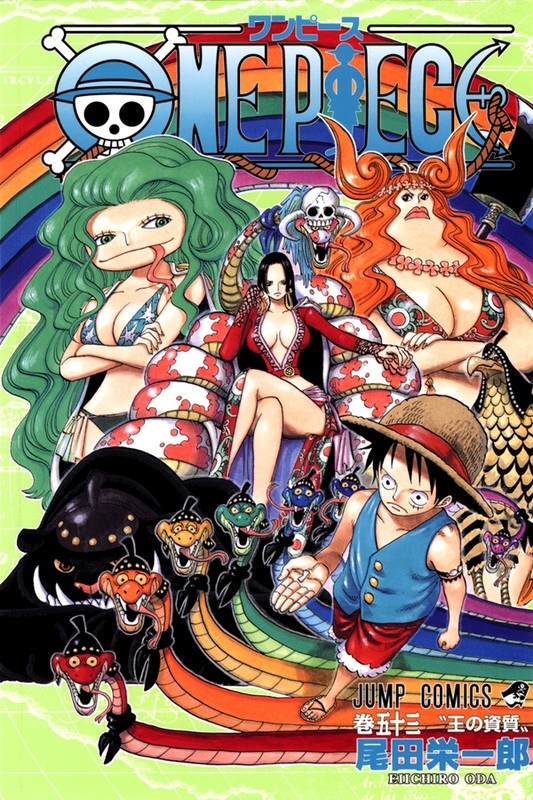 ﻿-In Impel Down, Bon Clay impersonates only Zoro and Nami from the Straw Hat crew.﻿ 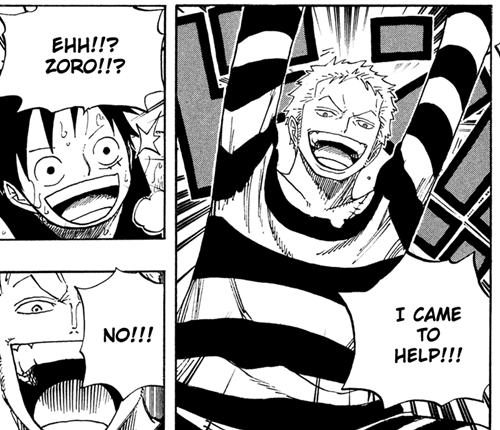 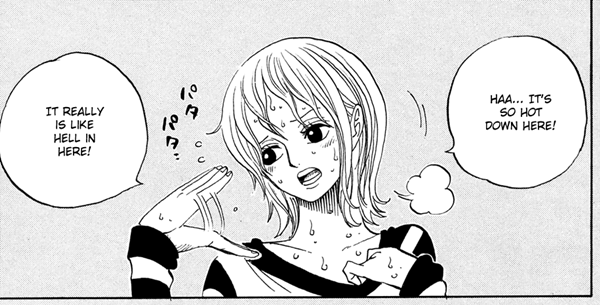 ﻿-No moments or hints whatsover.﻿
-I can't really imagine how it must have felt, having 2 years of nothing but Luffy and the war. I am somehow glad I started watching One Piece this late, so I had the war behind me in a week. Even so, I missed the crew so much (and I also miss Ace TT.TT).


My opinion and feelings about this saga (show/hide more information)